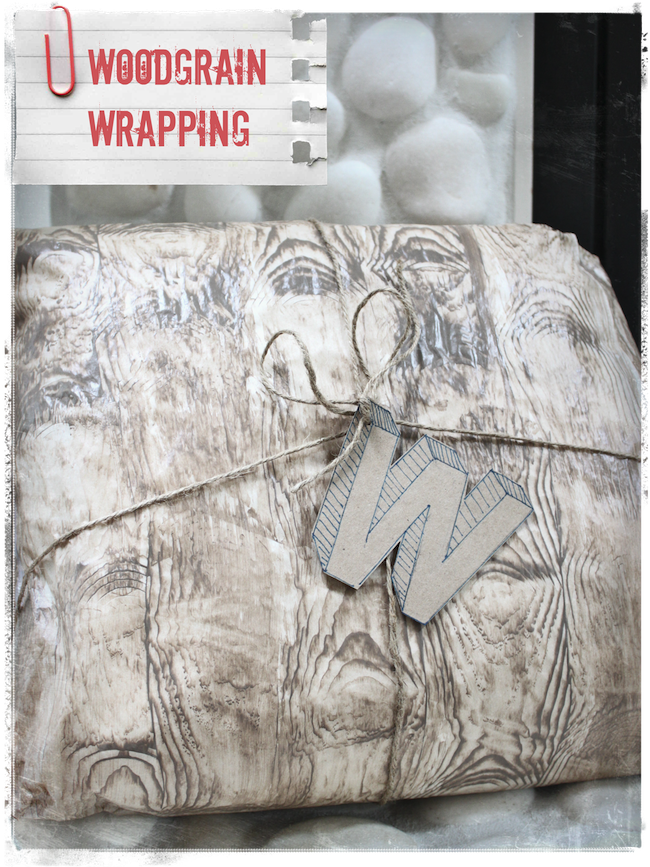 Well, let me begin by saying that this wrap it up post is later in the day because of a mess up, in a big way, that started early this morning.  It was a lovely morning and I thought I would finish up my post on wrapping up a knitting project I finally completed.  The trouble is I tried to carry too many things at once and the dark brown paint you see on this faux wood grain wrapping spilled over the carpet.  I mean all over and after finding someone, a professional - very early in the morning - to show up and try to get it out, to no avail - I had to resign myself to the fact that this little wrap it up cost me new basement flooring.  Oh well, I never liked it any way. 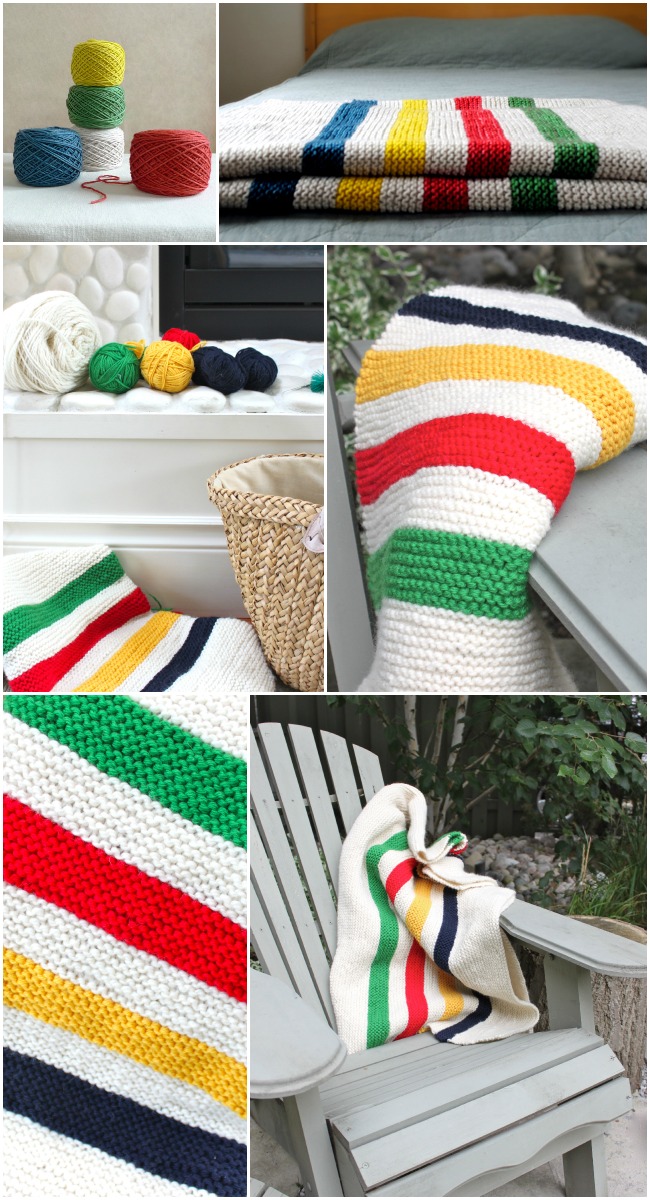 You see, it all started with this project from Purl Bee (upper 2 photographs)  A very simple, so I thought, but ambitious (for me) baby blanket inspired by the quintessentially Canadian,  Hudson Bay Blanket.  Now I normally knit small projects but I thought that it was time for me to take up something more substantial and in honour of my cousin's little guy's first birthday, I thought this might be just the thing to take on.  (and on and on)

That was back in February.   I even took this sucker to Florida in March, thinking I might be able to get it finished down there and mail it in the U.S., as my cousin lives in Colorado.  Boy did I look silly under the palm trees knitting away a Hudson Bay Blanket.  Well, finally, I finished - this week!!!!  I am proud I stuck it out. See it out on the front stone patio - I almost want to keep it myself!  It is alot bigger than a baby blanket, because of the thick yarn I used, which is a good thing because this little guy is almost a toddler now!! 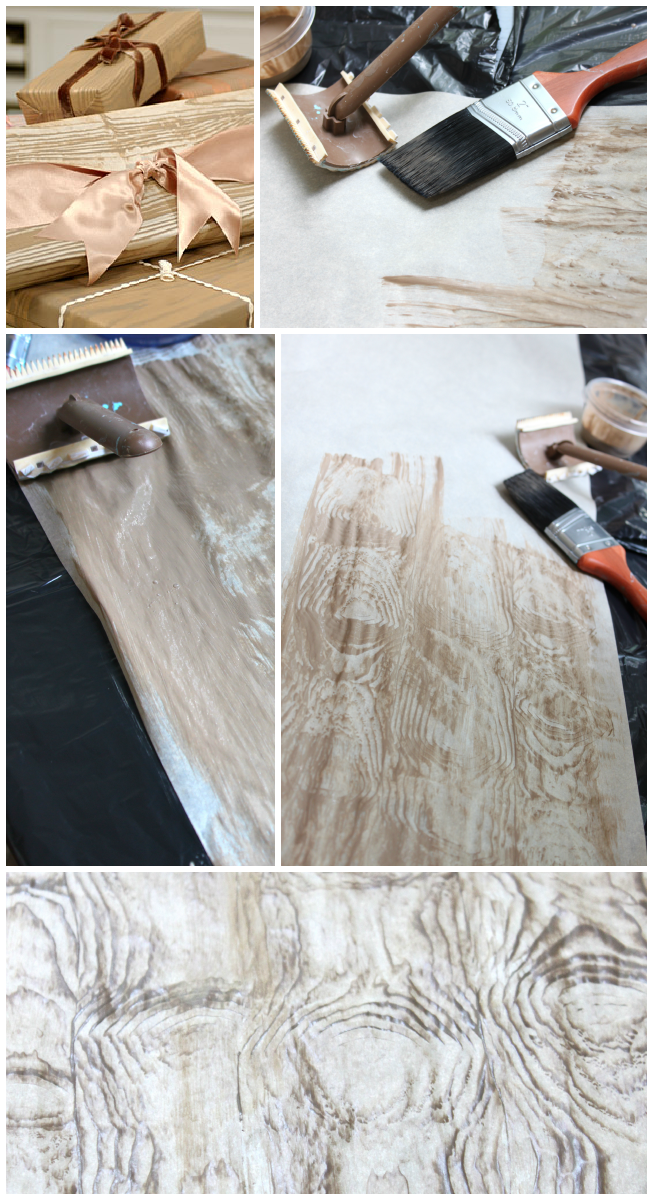 My aunt is heading out for a visit and  I think I have convinced her to take it in her luggage.  So, I needed something to wrap it up that was light and airy - I couldn't put it in a box.  Inspired by Martha Stewart's wrapping (photograph 1), I set out to create a faux woodgrain wrapping on natural paper.

After mixing brown paint with acrylic glaze, I painted small stripes of glaze on the paper and followed with a graining tool.  By using a brush the same width as the tool, you can almost create a planking effect. (photos 2, 3 and 4)  It's amazingly effective when it dries.(photograph 5 - bottom) When the strip of planks dried, I made up a large square sheet by cutting the strip in three, and with the help of a glue stick, the seams virtually disappeared. 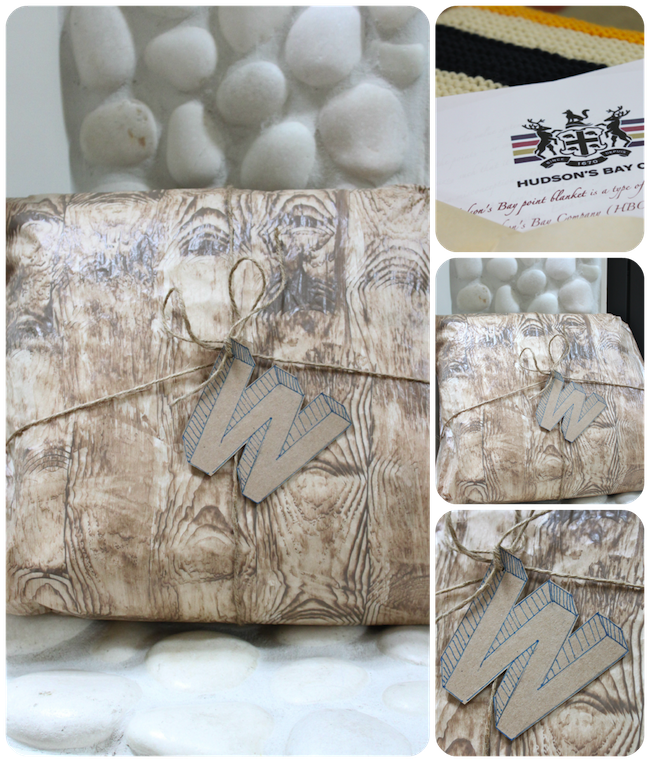 Since my Canadian cousin now lives in the rugged mountains of the U.S.,  I wanted to give her little guy a little piece of Canada. I hope that he is able to enjoy it for years to come.  I even included a little information on the history of the Hudson Bay Blanket,  all wrapped up in a "rugged" little package that included his initial as a tag. 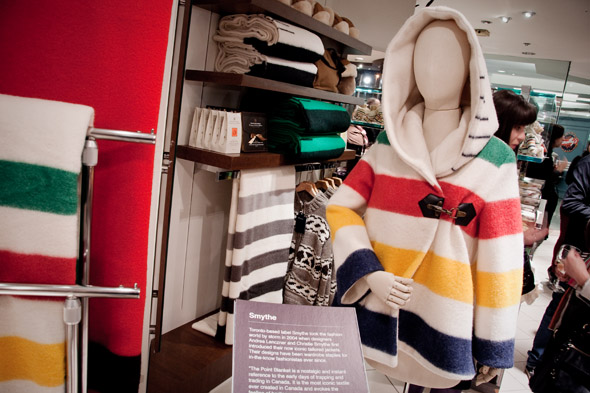 Now that I have finished my big project (except I guess the new project of fixing the basement floor) it's time to take on something smaller.  Maybe a version of the gorgeous Smythe Jacket and their interpretation of the Hudson Bay Blanket.  Well ... maybe not ... maybe just a hat for the fall :)
Posted by Tracey Fisher at 9:18 PM 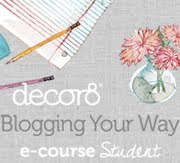